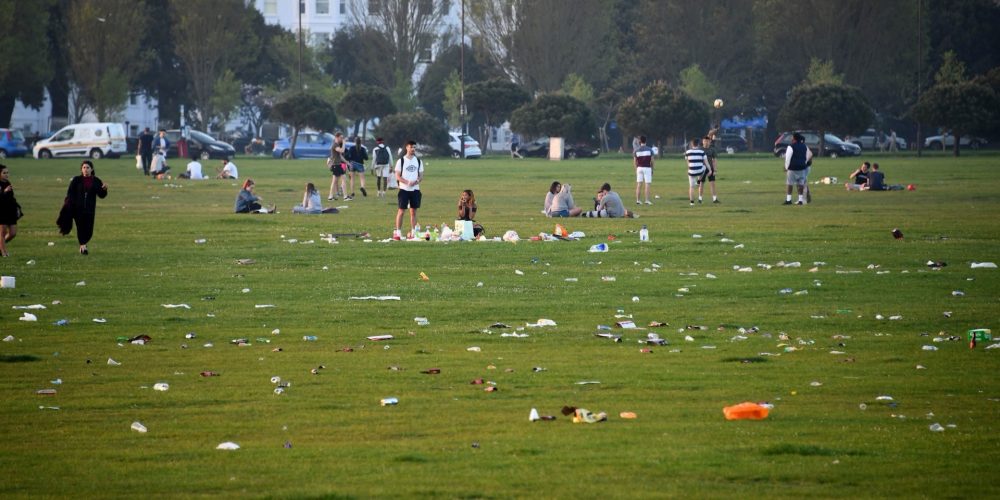 Clean up groups have hit out at “selfish” litterers warning that people must pick up their own rubbish because councils cannot afford to.

The scorching bank holiday weather drove people to parks and beaches across the UK, but what was left behind was a sea of litter.

Cleaning campaigners have now urged people to stop being “irresponsible” and take their litter home as councils can no longer foot the bill.

John Read, founder of Clean Up Britain, said: “It’s time that we start to enforce the laws on those who repeatedly drop litter, the clean up cost is something that council’s cannot afford and people really need to start taking some responsibility for their actions.

“Some councils are on the brink of bankruptcy, it’s time people took their share of the blame for rubbish.

“People should be ashamed of their irresponsible and selfish behaviour that has turned Britain into a filthy country.

“Take your litter home with you, it’s really not that hard.”

Last month councils across England were given the power to raise fines for dropping litter from the previous ceiling of £80 up to £150.

On Twitter one user posted a picture of Shoreditch park strewn with litter.

Parish Stilton pleaded with the council to put more bins and stations in the park, but Hackney Council responded tweeting: “We will tidy it up today of course and will look at the bins. The main photo shows that some some selfish people didn’t even bother attempting to tidy up after themselves, even though there’s a bin in clear view.”

Other Twitter users also voiced their anger over the mess that has been left in their local green spaces.

Joe Lycett said: “Hate to sound like your mother but if you enjoyed the beauty of Cannon Hill Park yesterday then the least you can do is respect it and the safety of the animals that live in it by putting your rubbish in a bin.”

Judith Watson added: “So this morning I picked up litter in Parsonage Gardens because the lazy folk who sat in the gardens yesterday with their Pret sandwiches, tins of G&T and Primark shopping couldn’t be bothered to put their rubbish into the actual bins provided.”

Keep Britain Tidy chief executive Allison Ogden-Newton explained that whilst it was wonderful that the warm weather had seen people enjoying the outdoors, it was the act of “thoughtless people” who deemed it acceptable to damage the environment for everyone.

Keep Britain Tidy estimate that the cost of cleaning up litter, as well as local authority street cleansing and fly-tipping removal is likely to be costing councils close to £1 billion a year.

Speaking last month on the increased littering fines, environment Minister Therese Coffey said: “These new fines will tackle anti-social behaviour by hitting litter louts in the pocket, whether it’s litter that is thrown from a vehicle or dropped in the street.

“Littering is a scourge on our environment and we waste taxpayers’ money cleaning it up – funds which could be better spent in the community.

“We want to be the first generation to leave our environment in a better state than we found it, and I encourage everyone to take responsibility for their litter and recycle more.”

Warnings were also put out by local firefighters after multiple calls were made to bins on fire after people had thrown away their reusable BBQs into bins and skips.

A spokesman from Cornwall fire service said: “Please make sure barbecues are disposed of safely after use in this fine weather. Make sure disposable barbecues are completely cooled and extinguished before putting in bins or skips.”